Several of our members identify themselves as crossdresser and/or transgendered.  We asked volunteers to submit their experiences to this question:

According to you, what is the seed that was planted in your past that makes you a cd today?

they were 8 and 9 yo, and then spanked me in front of them also and they all laughed and giggled

At 14yo I was at a party and an older hot woman (30 something) touched my arm next to my chest and whispered in my ear “you should be wearing a bra honey , your tits are bigger than mine”.

I blushed and a week later I put on a brassiere for the first time and it fit me like a glove , and I almost feinted if felt so wonderful. Haven’t stopped since then and

50 yrs later I love filling up a bra with my tits .

Can’t remember exactly what year, but it was in the late 1950’s….I was “less than 10”, and had developed a rash in the scrotum area just below my clitty…at that time, I was the youngest in the family with two older sisters, my dear mother thought the pain and irritation could be relived, not only by a thorough washing and powder, but wearing a pair of my sisters nylon panties…they were so smooth and soft, a sensation I had never experienced…they may not have aided directly in the healing of the rash, but it definitely opened up a whole new chapter in my life that has continued, on and off, for nearly 60 years…I love my mother, who is still alive today, 93….I have so much to thank her for, but have NEVER thanked her for THIS….what do you think…??? shall I thank her NOW…??? hahaha…not if I want her to live to 100…but deep in my heart, she is “my crossdressing angel”…LOVE YA, Mommy…!!!

When I was about 6 and my grandmother would lay down beside me to take a nap and she was wearing a white nylon slip….. and at about age 13, I found a pair of nylons in the trash that my mom had thrown away… and so it begins…. xoxoxo sara

i remember so vividly watching my mom getting dressed for her waitress job…. she wore a white dress that fit her so nicely….I enjoyed seeing her put on her Bra and panties after she took a bath… she came back to the bedroom with a towel wrapped around herself. She put on her panties then remove the towel to put on her bra…. Next she put on a beige garter belt and Black hose… the pulled her white uniform dress over her head…. She looked sooo Beautiful… I was only 5 at the time> thought to myself I would Love to look as lovely as she does. As i grew i would often spend lots of time browsing the Sears catalog drooling at all the lovely women in panties, lingerie and ladies wear..

I used to look at lingerie catalogs when little and thought how much prettier girl’s clothes were and my prior lives bubbled to the top. My siblings were much older and I was “unexpected”. Always suspected my Mom wanted a girl as she used to paint my nails. Dressed every chance I got & she walked in on me once unexpectedly. She found me wearing her panties & bra and “punished” me by making me put on a slip and blouse & skirt, then applied lipstick & mascara on my lashes. She made me stay dressed for dinner with the family and for the evening. It was glorious.

Started wearing pantyhose back in 1974. I remember it well. One day as a young boy, I was watching a cold and snowy football game on TV and it was said the Joe Namath and some other players were wearing pantyhose to keep warm and make there legs slipperier and harder to grab. I also saw Joe in a TV commercial wearing pantyhose. As a young football player myself this intrigued me. I love the outdoors and even camped in the cold wintertime. Do they really keep you warmer? So I gave it a try and WOW, I was hooked and they felt great. As I grew older I notice that girls in school were now wearing pantyhose, and starting to wear heels. It jump started my interest in girls. Their legs looked great and I loved caressing them (made many girls happy). Soon after I tried heels, skirts and so on…. I enjoy looking at other well-dressed women and the illusion factor of other CDs.

As an only child and not in a wealthy family, I had to make my own amusement. When I first started dressing up I don’t know exactly around 5 maybe.
Mum used to dress undress and bath with me watching or at least there in the room.
I didn’t think much about her nudity it at that age. But i did like to grab her warm undies nylons and petticoats and put them on. She didn’t seem to mind at all and I soon had free range into her whole wardrobe.
She thought it was amusing and that I’d grow out of the ‘fad’ . I didn’t

There was a stuffed animal Mom made from a pattern that she stuffed with old pantyhose. One day part of the seam came undone and…poof…instant stash to play with.

I was drawn to and wore my mom’s pantyhose from somewhere around the age of 5 or 6, maybe even earlier. Around 8 I would wear them under my jeans and I remember letting other boys touching my smooth legs. I’d wear pantyhose and press my tuck so vigorously to whatever a prepubescent orgasm is. I remember doing so to an animated domme reporter comic in the back of Cracked Magazine. Growing up catholic, guilt and shame suppressed my urge to dress until my college years. I always had a fetish for pantyhose, and one of my girlfriends thought it a novel idea to make wear them instead. Instantly hooked again, and looked deeper into the rabbit hole from there. Now, being Randi is all I can think about.

Some seeds take a long time to germinate and that fits me perfectly. When I was young it all started with my Mom’s nylons and also the ones worn by the woman in my early life. The ground was not fertile or I was too repressed to let it grow and there it would lie dormant for decades with little attempts to let it bloom.

Born in 1952 in a small community in Germany, I lived in a small 4 room apartment with my Mother, my Grandmother, and 3 aunts. My Mother was the oldest sibling at age 17. As a young toddler I was always crawling around the floor.  As you can imagine, back then it was mostly work and a little time for leisure and play.  My Mother worked at a cigar box plant, supporting our whole family.

My other aunts, aged 16, 15, and 14, were finally allowed to wear nylons by Grandmother.  During many card games at the dinner table, I would rub all those silky nylon legs.  My Mother and her sisters would encourage me to message their silky and slick nylon feet and toes.

When I was 4 my fascination with nylons grew more.  There were stockings lying around everywhere on washing day.  I couldn’t resist any longer and grabbed one that had dropped to the floor while drying.  I rubbed it over my face, arms, and chubby legs.  The feeling was calming and peaceful to me and proceeded to slide the nylon up my leg, as Mother entered the room. 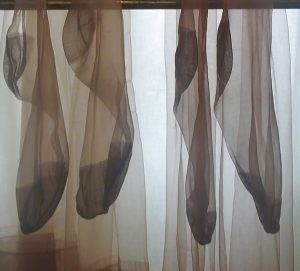 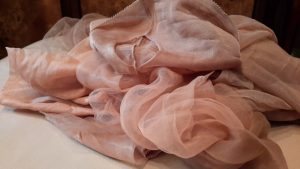 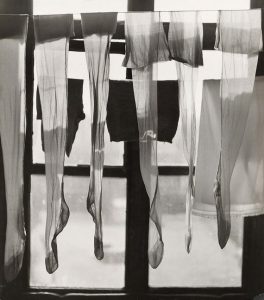 “My my, what do we have here?”  She asked if I liked mommy’s stocking and I nodded yes, much.  “But you only have one and nylons come in pairs.”

That Christmas eve was special to me as I had my fifth birthday that day as well.  We always opened presents that night and had some left over the next morning after Santa arrived overnight.  Everyone dressed up and were stunning in their nylon stockings.  5 sets of nylon legs making that incredible hissing sound as legs crossed and re-crossed.

I was asked which of my presents did I want to open first and I pointed to the big box under the tree.  Mother suggested that small cigar box with the pink ribbon on it.  I opened it and inside?  2 pairs of silky sheer nylons, one taupe and the other a bare cinnamon color.

This site uses Akismet to reduce spam. Learn how your comment data is processed.